Plan for your Dream Home now!

How can someone with a love for cars and a medium budget to build a house, create the perfect combination for both?  Can the house plan layout also allow for multi-generational living?  Will it fit on smaller lots and is it available in different styles?  Can this idea be expanded for larger homes with even more cars to enjoy?  Can it be built even smaller?  YES, on all counts! 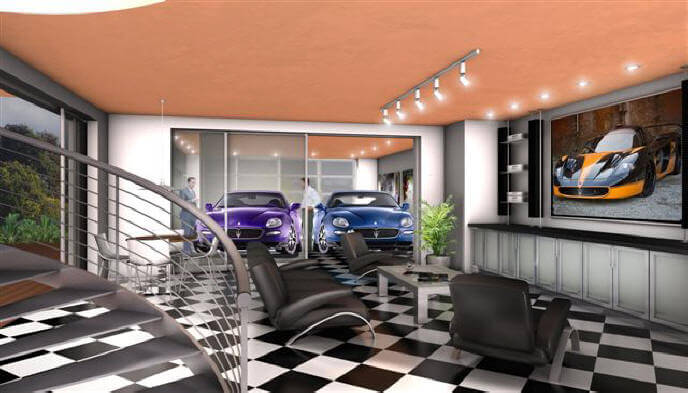 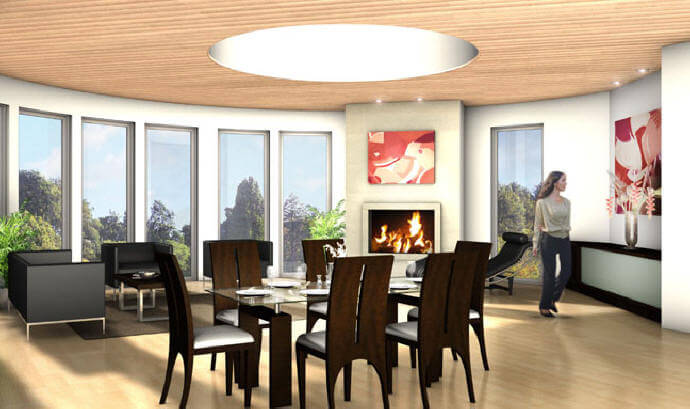 The CLDH-1 has the bones to be the solution to several scenarios.  And the amazing thing is that the idea was borne during Medieval times, finessed during the Renaissance, and resurrected by Modernist architects like Corbusier and Frank Lloyd Wright!  How so?  Well, it’s a long story but worth the read.

In the days before electricity, air conditioning, mortgages, and architects – the outlook on life was rather bleak; life expectancy was low and calamity of all types was around the corner…  Most of the European population in the 8-12th centuries was involved in basic agrarian pursuits.  Farmers at first built one simple structure to live in and to protect their animals at night.  It was a basic box with a pitched roof.  Inside, the family and livestock was cordoned off by a rope or wood rail.  Living conditions were rather primitive as you can imagine!  When expansion was possible two options came to mind: either move the family up into the rafters/add a second floor -- or build another structure for family only and leave the animals in the original, designating it a barn. These two alternatives can be seen today in the many examples dotting the countryside in Europe, especially in Provence and Tuscany. 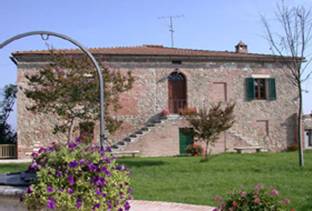 An alternative deemed economical was to build a second floor for the family, leaving animals, farm implements and stores below.  In fact heat from the animals rose and helped keep the second floor a bit warmer in the winter.  The first floor fireplace flu was built upon and extended through the second floor.

Now these living quarters became the ‘piano nobile’—an Italian term that literally means the noble level, or owner’s suites.  Over centuries, the compact two-story form gained the reputation of simple construction and energy/materials conservation.   The same derivative in colonial America is obvious.  When the decision came by those with means to build anew or for the first time, this geometrical form was one of two options.

During the Renaissance, symmetry (as in the human body) was deemed a guiding design principle.  While the rustic farms had single stairways usually off center, the larger new villas being built by wealthy merchants and nobility in the south of Europe incorporated central stairways or double flights on the outside to offer a direct route to the piano nobile. (Villa di Poggio a C no, below) 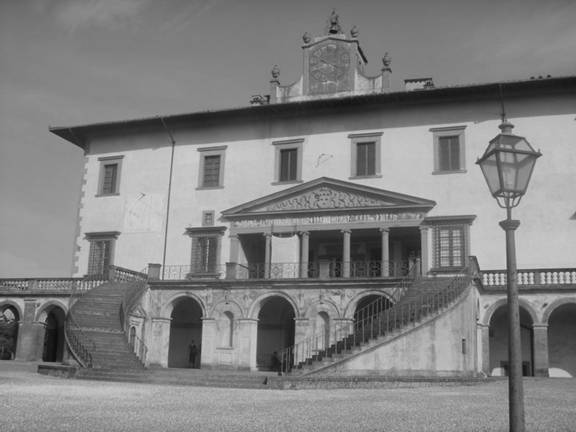 When nobility and royalty erected palaces and chateau, this same model was followed in countless examples.  If you recall Versailles, the king’s chambers and formal suites are on the second level, not the first.  The first floor contained rooms for offices, livery, stores, guest suites and reception rooms.  The wonderful Linderhof in Bavaria is organized exactly in this manner.  In Venice, the palazzi on the canals have similar space layouts.  In fact, this historic idea was incorporated in several of Frank Lloyd Wright’s designs and was the model for Corbusier’s ‘Villa Savoye’ in the 1930’s. 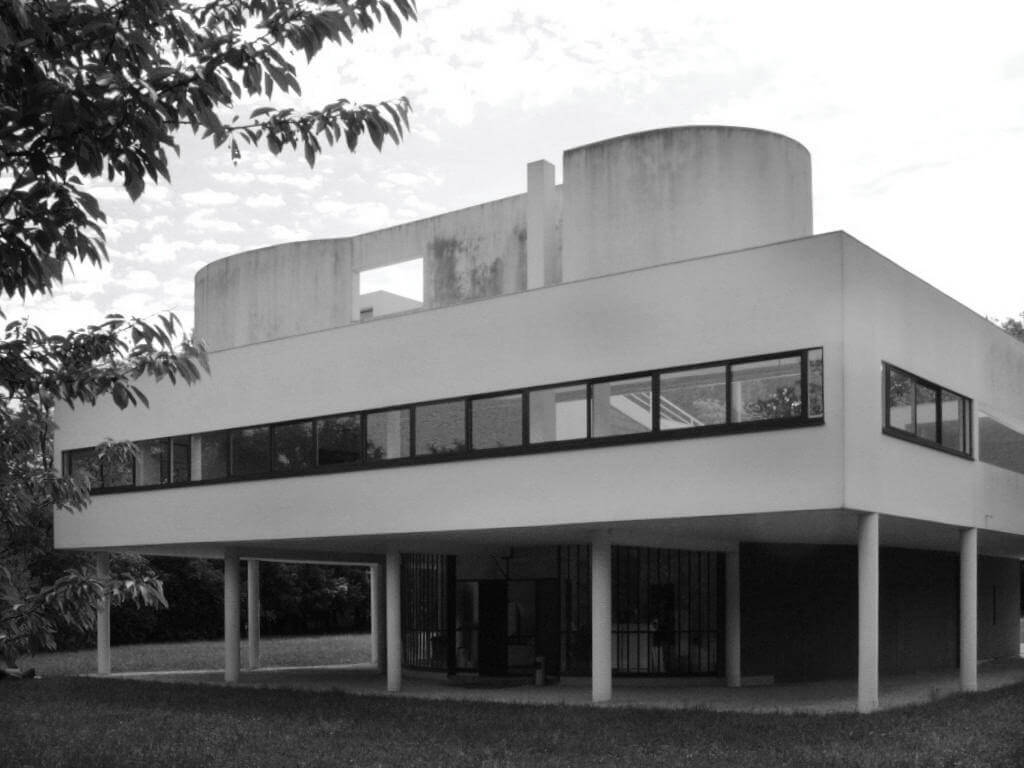 Frank Lloyd Wright’s reasoning to ‘go up’ was simply to avoid the noise and distraction of street activity in a bustling age of horse carriages, noisy new cars, and constant pedestrian traffic.  He was so inspired by this tree top view to the outside world that he created his famous leaded glass based on natural forms.  Corbusier wanted to improve the view of the owner’s ‘piano nobile’ on a second living floor and offered a third level observation terrace.  He also separated the car and utilities (machines) from the living quarters. (Arthur Heurtley house below, FLWright) 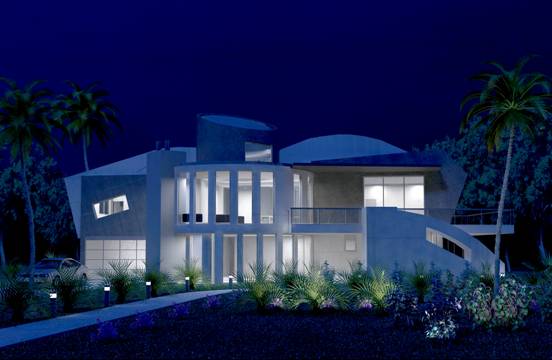 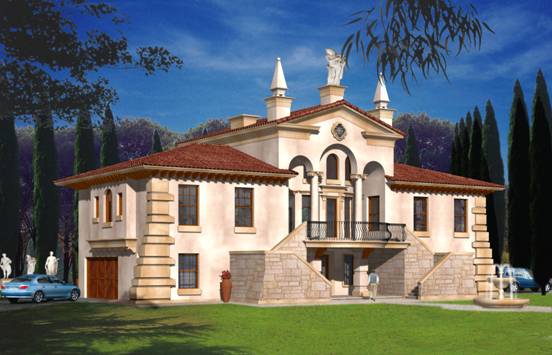 In both models the ground floor has two 2- car garages on either side of a center section which is a den and a room for an office/work area with a separate entry.  This den is developed as either a showroom for car aficionados with pocket sliding glass doors opening directly into the garages so that you can enjoy the toys without having to go anywhere else, or as a second living area for multi-generational living.  A kitchenette can be included so that two families or younger/older generations, relatives, special needs, elderly parents, etc. can share the house.

The designs can be modified with front load garages if the property is too tight and other plans are developed for larger and smaller car collections, bedrooms and activity spaces.  The style of home can be nearly anything you can dream up based on the two concept designs.

These designs are zoned to offer a maximum of flexible living arrangements.  A few possibilities are as follows:

Young Family: Can leave entire ground floor unfinished (new construction) including elevator, and live perfectly on second floor.  Dining area can be extended into the bedroom and then in later years opened into a Ballroom.

Intermediate Aged Family: Teens can move downstairs with their own Den.  Washer/Dryer and small Kitchen/eating area allows maximum privacy.  Parents above also have their own privacy.

Mixed Family:  Two different family groups or individuals can share space.   Garages on both sides of ground floor can be used independently of each other.  Independent entries are available on both levels.

Mature Family with Elderly/Sick: For baby boomers, semi-retired with aging parents- easy to care for loved ones on main floor with own living and kitchen facility.  Elevator can be activated to bring upstairs for dining or visitation, etc.  Private and independent as necessary.

So, we have not really reinvented the house -- John Henry Architect has reintroduced and packaged this superb historic notion for the contemporary homeowner.  Where there were storerooms and animal stalls, now we have garages, storage area or office with private exterior entry, secondary bedrooms with baths ensuite for older children, parents, or a second family, galley kitchen/utility room, and large central den/reception hall – accessed from ground floor directly.   There is a grand sweeping interior stairway or a winding stair, and an elevator to communicate effortlessly with the upper floor.